Last night a guy came in to our building. My bud lived in this building a floor upstairs of mine. We were walking from buddy's unit to mine through the stairs and when I opened the door to the stairway, I didn't know the dude was sitting behind the door on the floor shooting some crap there. He scared the crap out of me sheesh! I think I might have kicked his leg actually. I screamed. Buddy ran to the front to see what happened and the dude murmured he was tying his shoe lace. Yeah right. I went to grad school too dude.

This chemical consumer then went to the other dude that lived two doors away from me and held a sandwich shaped tissue wrap in his hand on the way back when buddy and I went to grap a beer in 107. I called the manager this morning and complained for no security guard at the front desk for an hour with the door opened last night. The mental ward's management is too busy to listen to my complaint. 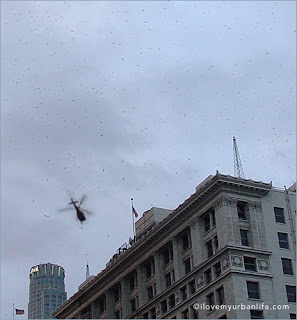 [Photo from ILoveMyUrbanLife.com] My door is beat up. I have no phone jack, no Internet. My neighbors are convicted murderers, retired / practicing drug dealers and crazy Russian ex-girlfriend of one of theirs who still sleeps in the building somewhere with her 7-years-old son telling me about their affair in tears. I had a crush on her Russian boy who told me about the migrating birds all flying to Downtown lately though. I was just afraid his mom would offer me her son so I kind of took off after slightly socializing with the boy, cuz the security guard did tell me in the past, in Rosslyn Lofts, there were times when people would just drop infants off in other people's units and disappear. I don't know what I'm gonna do if suddenly I have a 7-years-old Russian son. I think I might really just keep him and take him to watch birds with me everyday, you know? I already have a pair of binoculars anyway. And I did have a wonderful time watching the pelicans in Pismo Beach. There're just so many big rocks and cliffs where the pelicans and seals just hung out. They're so cute and free. Oh god, speaking of that, I love watching birds. It's so relaxing.

The other day, I opened my door at 6:30AM and instead saw a yellow bath mesh and some half-full sample-sized bottles of bath products there. [scratch head] What the fuck? Did somebody take a shower right outside of my door on the hallway when I was imitating Ella Fitzgerald on DVD at night?! I think that could be a flirt. Nah, just kiddin'.
Posted by .

this is sorta terribly written.