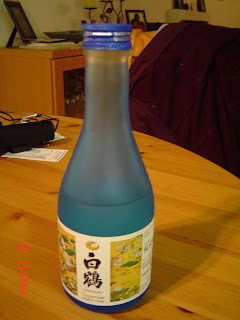 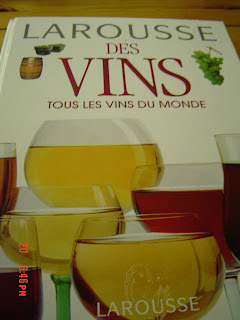 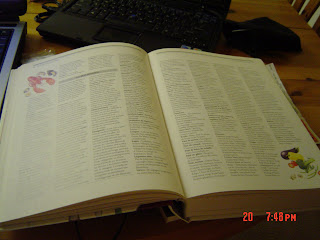 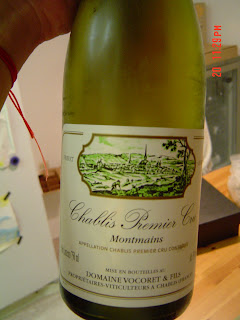 Okay, stop your jealousy, you know I kick ass. I made katsuo, salmon, uni nigiri-sushi. Why nigiri? Because I forgot to buy the nori! First time making sushi without seaweed...

With this "white pelican" sake, it's really perfect. $7 per half bottle from Mitsuwa, it's really dry and smooth for the uni.

And for the fish, 2001 Domaine Vocoret et Fils Montmains Chablis Premier Cru Burgundy is the bomb. Hands down. Beat my favorite chardonnay Villa Maria like a piece of cake. I'm really not a white wine person to start with so my enjoyment wasn't as intense as my dinner companion's. He looked like he had an orgasm with the Vocoret's.

Dinner companion was reading this book to pair the katsuo and salmon. I picked up the Chablis, turned it and thought maybe the label said it on the back? Then I was told "serious French wine never told what to pair on its back cuz you're supposed to know it". Okaaaaaaaaaaay... FINE! I'm from a third world country; we dance in clothes made of grass in the mountains and celebrate when it rains and kill little piggies to worship the sky when there's running water installed, how's that? Sheesh... 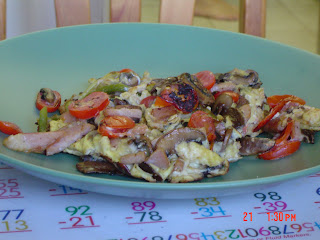 There seemed to be some competition in the kitchen though. We're both given some mushrooms, a half green bell pepper, small organic tomatoes, some eggs to make an omelette. Look, I don't know how to cook but I know how to make an omelette. I've been frying eggs since the age of 8. I'm the Goddess of Omelette. If I know nothing, I know about omelette. And let's face it, Hong Kong style omelette kicks ass! But then I was challenged by the Paris style omelette (1st picture). Dinner companion fried the veggies pretty thoroughly first, then added a ton of mushrooms until they shrank, then fried the eggs at the end. Geez, the mushrooms smelt good; I got a rival. 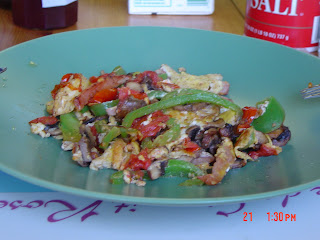 On my side, I liked the veggies more uncooked. I slightly fried the eggs a little hard first, then added the veggies in the middle and tried to flip the whole thing, but then it broke, and I blamed the pan for its being too small. (2nd picture) Come on, if it's mom's big ass round Chinese wok, I'd have won with my sticky semi-soft egg for sure. No one wins over Downtown Chick's breakfast black pepper omelette... In the end, they tasted very differently but were both pretty dang good. So, okay, we agreed next time we're not gonna make 2 omelettes separately. I heard the Parisien could actually live with the H.K. style omelette... What a torture for such sophisticated people huh...?!

Tonight is the first night I just totally love throwing my The Story of O and Marguis de Sade to my dinner companion and telling him it's his own culture that fed me to grow up as the pervert I currently am. Really, I can be whoever I want finally. When I stop struggling with getting anything anymore, I start having everything.

Interviewer: Your life has been chaotic, tormented. Other artists have sacrificed much less for their art. Do you think that if you have followed their examples, your days would have been more peaceful?

Edith Piaf: Oh probably, but that way I don't think I would have offered as much as I did to the public. In my life, I do things with total abandon.
Interviewer: You don't believe in moderation?
Edith Piaf: Oh no, definitely not.
Posted by .

The Vocoret Domaine in my opinion actually is the most underrated producer of authentical and extremely fine wines of Chablis.
I rate this domain at position 3 in village appelation after GROSSOT and Didier PICQ and also in position 3 in 1er and grands crus after Raveneau and René & Vincent Dauvissat .

No hesitation . Try to buy these wines before world’s most famous criticists rediscover the domaine.

It was pretty amazing. Time to go shopping soon before it inflats like you say Robert... Thank you for dropping by!