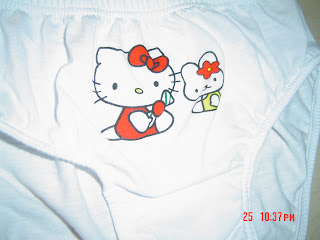 Downtown Chick: Well, this week has been good. I ate some canned meatball spaghetti, went on a date with Keanu Reeves, saved my half month's pay after paying for my car loan for my black on black tinted Accord EX V6 which still runs like smoke when Grass-eater looks out from his window and sees I'm stalking him, gas for around $200 a month which used to be half (I'm already pumping mostly just Arco and 76) and Mercury full coverage insurance and only bought half a dozen pairs of Hello Kitty panties from Fashion District. They're going for $13 a dozen and I managed to only get half a dozen. They come in bubble gum pink, sharp pink, blue, green and white. I got the light pink, dark pink and white in Downtown. Of course, it's made in China, not by Sanrio... 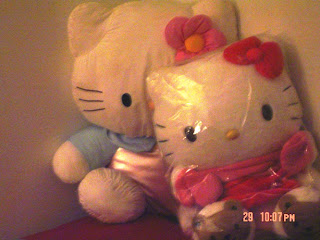 Um, I'm sorry. How many minutes do I still have...? Pardon...? Oh two and a half...? Okay... I'll share more then: when I was small, my parents never bought me any Hello Kitties so I feel an urge to pamper that inner child of mine that still desires Kitty and wants to be her best friend now. In the end, we were born in the same year (1976 - there was rumor about Kitty being born in 1974 which was untrue; probably her ex-boyfriend - the little teddy bear on the second picture on her souls whom she used to date - spread the rumor after they broke up cuz he's jealous of her continuous charm over three decades while he lost his hair, got a beer belly and married an ugly Japanese dumb ass...) and both of our hobbies include making new friends, traveling and baking cookies.

admit I am powerless to my addiction to Kitty and leave myself to God. God loves Kitty too. He told me last night when he helped warming up the Whirlpool oven. I mean, God is nice guy. He's really caring, has a good job, takes me out, bakes cookies with me but for some reason, I just couldn't get to "it". I love him. I definitely do. There's no doubt about it. But when I thought of Kitty, and how girly I feel with only Kitty in my bed with only my little girls' panties on, I just wish that's forever. I just wish my pussy will never be territorialized by anybody else until I die. And I just wish I will die as soon as I want.

I have been volunteering in the Downtown Women's Center and working a new job trying to be helpful. I hope when my life has no meaning to myself, it can still offer others some use just like wrecked car parts on Craig's List. Thank you guys.

I went to a store in the Glendale Mall that specializes in Hello Kitty merchandise. I asked if the had a Hello Kitty t-shirt in xxxlarge.

The woman working there went in the back and came back with a one-piece shirt and pant combination. I could have gotten it on, but it would have fitted me like Spandex.

How sad is that? Hello Kitty clothes just aren’t there for me!

What Joe?! You have xxxlarge for Hello Kitty?! I've never seen that big before! The biggest I've seen was in Target, girl's size 16.

I'm sure if you're serious about wearing Hello Kitty, you can get one on Chinese ebay for big adult women. Pretty sure. Of course, that'll not be made by Sanrio. The Glendale store you went to is probably a real one?

[…] I feel very peaceful to be home alone in bed by the Kitties. I hope soon I will finish serving my time and can leave this […]

Aw, yes, my post? Are you talking to me?

Yeah I know, these days, the TV, the alarm clock, the radio, everything is talking to me. Now, even my own post starts talking to me… Can you still say this’s only hallucination?

I might find one on Chinese ebay for big adult women?

Not a problem, downtownchick. I’ve worn women’s clothes before. They made me feel, well, mighty real!

Let me know if you have any problem finding them. I might know where the “b” good plazas are. They got Chanel too. Hah!