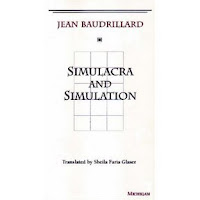 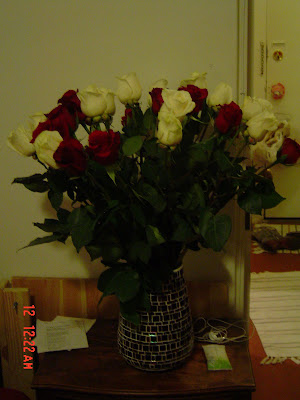 So, you know, when I first started dating Keanu, it's because he played in the movie under the influence of one of my favorite authors - Matrix. But then it's really too far of a stretch. Keanu looks kind of more thoughtful than some dudes from Venice but he really doesn't know jack about simulation when you start talking to him in French. Plus he kept taking me to his Hollywood red carpet parties, private jets to Hawaii and shit like that which just really bored the crap out of me. I always forgot to bring my perfume and anti-psychotics when I traveled which didn't help recovery at all. So after a while I decided to end it with Keanu when the New French President sent me poems and roses to my apartment in Downtown everyday... How romantic...

Everybody thought his ex-supermodel wife dumped Sarko right? Actually no, he dumped her for me... Poof! No one knows... Sarko hates people knowing his private life. One time Yahoo found out about us from our email conversation. He freaked out. 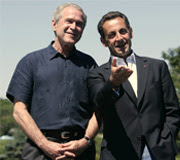 "I'm gonna call my friend and fire that guy in Yahoo who's gonna tell the world about you and me," he said when I was busy closing my curtains when he came over. You know, Downtown is full of journalists and bloggers. You never know.

"But um, my dear, I'm not sure if you can do that. It's Yahoo. They can even kowtow to China on the expense of some journalist's prison time for their offices in Beijing and Shanghai. It's not Paris Match you know? This's America..." I turned around and mumbled.

"Yes, I can. I've gotten some friend there too."

"Really? You know people in America too? You never told me. Who?"

"Bush!" He had just come back from Washington after some hotdog and burger meals.

"But you sure you wanna do anything him? He's a serial..."

"Aw, okay, so, can we eat now?" Well, there's always a way with anybody including controlling French men. 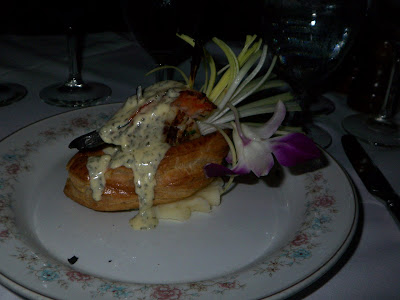 Because it's bad English if we use the same word twice in a sentence, I'm gonna say "Sarko gave me a passionate tongue-involving kiss and we went to our favourite French restaurant." We started with this scallop and shrimp brochette in puff pastry and fine herbs mousseline first. How to stick the pastry to the plate so it doesn't move? Put some mashed potatoes underneath. That's the trick. The puff pastry was good but I couldn't eat the whole thing. Too much carb. I wasn't that impressed with the scallop and shrimp. It tasted a little over-cooked. For seafood, I'm all for the Japanese and Chinese styles. Fresh and raw. Cooking isn't my favorite way to handle seafood. 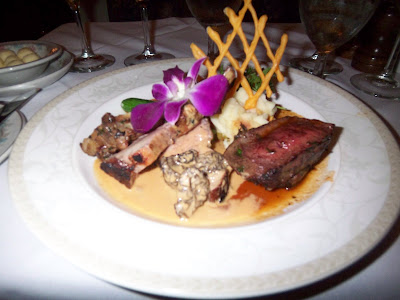 And then here came the roasted venison in poivrade sauce and baby veal chop in morrel cream sauce for the main. The mushrooms on the lamb were truffles. They were so delicious. As much as the beef was also juicy, tasty and of good quality, the lamb was just so so tender and nice. It was pretty unbelievable. I had not had better lamb elsewhere in Los Angeles. 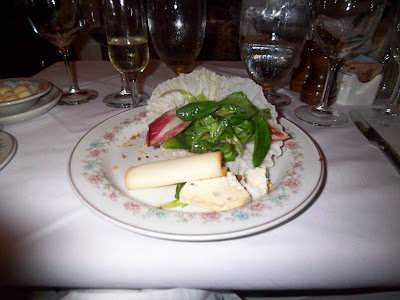 Unknown French cheeses with mache and endive salad. That's something I'm not used to: eating salad after the meat. 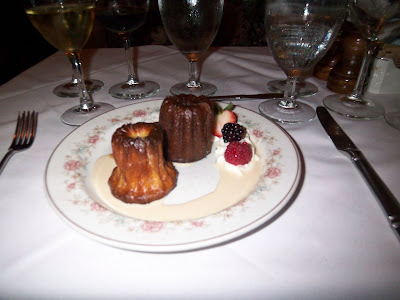 These two cute cones were dangerous, especially the vanilla: chocolate and vanilla canneles with hazelnut sauce. The vanilla cannele was a piece of art. How could a dessert be so tasty? That's really too much. Felt like I had an orgasm.

And of course, Sarko won't let me tell you where we went. Duh!
Posted by .

It’s a well-known fact that deep and passionate tongue-kissing tends to create the false impression of scallops and shrimp being over cooked….

frank, yeah I know, Sarko's roses died in 2 days on these warm days… So fast… Too many tongue-involving kisses…

Possibly they die from the heat of passion. I mean literally, tongue-involving kisses also emit radiation.

:-O
Really frank?? Thank you for the scientific fact! I’ll wrap the handsome new French president up with aluminum foil sheet next time he kisses me to protect my 30 cats then…