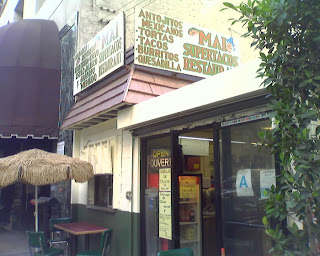 [Photo credit to Lucas R. on Yelp.com] Um I think the folks in Mai must have been partying the night before I visited and had a serious hangover... They forgot about the food in the trays at all...!

The pork was dried up at the tips, tough and the sauce was mundane... I don't eat tortilla so I went for the carnitas plate with rice and beans... Let me put it this way, the little yellowish rice was worse than what you'd get as a side from El Pollo Loco, and the beans were just plain Mexican-normal, nothing special. They did give me a lot of cilantro in red sauce which kind of made the plate a bit less disappointing but even the red sauce wasn't that impressive at all. I was disheartened. Paid $6.45. I'm so very over it like an ex.
Apparently not all mom and pop places are good. Some are just mom and pop and maybe even aunt and uncle and nephew and niece... but nothing good to my mouth.
Posted by .

There’s a Mexican place on Spring near 4th that is VERY good. I forgot the name, but it’s on the West side of Spring, a sit down restaurant.

Are you talking about the one starts with an E... and with some yummy-looking seafood soup...?

That’s probably it. Been there a couple of times.

Yeah the lobster soup looks pretty dang good on the picture... Too bad every time I pass by it's either closing or closed...

The food is authentic and very tasty.

Maybe you should take a trip to Ensenada and get a bowl of Abondigas soup. It may help with you cold.

A B, did I do anything wrong? I ordered the Caldo 7 mares (7 Seas Soup) with fish, shrimp, octopus, abulone, mussel, crab and calamari. The abulone wasn't even open! I was afraid it's bad instead of it's just not cooked enough so I told the waitress to just take it away when she suggested to cook it more... The rest of the sea things were all very so-so. Should I still go back for the Abondigas another time? I order the 7 Seas Soup just because it looked good on the picture... Online dating?

Oh man, sorry to hear that. I haven't had the seafood, only the taquitos and burritos, and they were good.

Okay, got it down, cross out the "seafood" on my book... Taquitos and burritos, met through "a friend named A B"
;-D

Bar 107, solid dive. It's by the same owner of Bordello. The music can go a little lower. Not a good place to actually talk but for a casual beer, especially when there's the $2 special on, I don't see why not. I'm actually really not big on bars so I don't know. At least in 107 you're in peace with a bottle of Corona in the deep deep end with the big couches past the photo booth; you don't get ugly fat guys in shiny club dressy shirts hitting on you while they're everywhere in the Boardway, Standard roof top and some nights at the Edison...