"I'm happy. I don't want to see or hear anything." 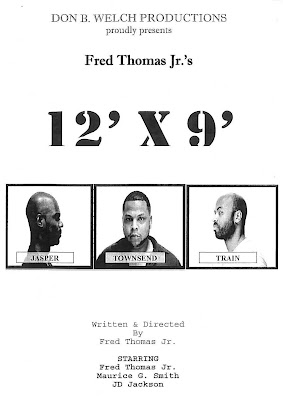 Dinner companion and I volunteered to take a senior lady from the Women's Center to watch this play about three inmates last weekend.

So I drove her from Downtown to Hollywood. We talked about the weather. She said two years ago there was snow in Compton and nobody (in Compton) knew how to scoop the snow and they had to find "those Chinese people" there to do the snow.

I was a bit shocked. I wasn't sure if I should come out I was Chinese, not Korean right there (cuz I got those Korean, Japanese guesses more often than Chinese in L.A. even from Chinese folks themselves and was pretty sure the lady thought I wasn't Chinese). I also just wondered if anybody said anything about "those black people" how it'd come out nowadays in America but okay, a little warm-up, no problem. I'm glad somebody did the snow anyway. Those Chinese people scooping that unusual winter snow in Compton, sure, why not.

So we watched this play in El Centro Theater.

Rings a bell called The Birth of the Prison? - It's not about who's in the prison but the problems with which society where prison system belongs to can't deal.

It's sad I've never heard anybody telling me they're going to vote for Dennis Kucinich while I've read nothing better than his on the issues of racial bias on drug related crimes, mandatory minimum sentences and unaffordable healthcare from his competitors. He'll even decriminalize marijuana for Heaven's sake cuz we've gotten better things to do than spending 10 billion a year on busting podheads. Hello, where's the 420 friends in Hollywood? Can't we just get the boys back home and send them to school so everybody learns at least how to spell if somebody's just found with some crack in his hand or driving a thug while he doesn't even know?

Dennis Kucinich is a classic example of elitism so he'll never even get close. Insights doesn't sell here. Americans buy drama: commercials, commodities they do not need ranging from SUV to too much food, Oprah, stupid TV shows, the American dream of a dang house they can't keep up with its payments, cheesy affairs that wreck homes, no?

It's a political culture of ostriches. "Lock the intimidating up, put the crazy to the streets and I live in the suburb. My kids are going to USC so I can live with being in the largest prison in the world. Once in a while, I can even shed a tear watching Oprah motivating the little girls in her cult show and endorsing Obama," right?
Posted by .

Yo, DT chick. I don't wanna be president. But thanks for thinking of me.