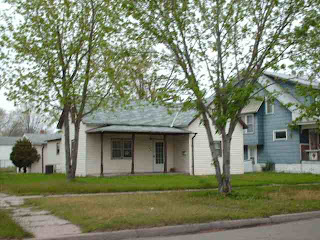 See? Once again, I prove myself a genius. I suddenly thought of a way to pay the same or even less of our rent in Downtown to afford a 3-bedroom house!

Where's Grand Island? No, it's not in the Philippines you idiot. Nebraska dude!

I've actually been in Grand Island numerous times. I went to the riverboat casino in Iowa, Kansas City many times, Missouri, Illinois... The only place I will beat Grand Island with in the Midwest is probably Chicago but I still should move to Grand Island because for only $391.56 a month, I get my own house. There're Walmart, Walgreens, Burger King, Johnny Cash and MidWestern guys going to church...

When the men talk, they say a lot of "Oh boy..."'s, like they're 60 years old ... like Grass-eater did... and they tell you they're going to "the boy's room" before the movie starts... I have a co-worker in his 50s who talks like that. If I had a penis, in the two weeks that co-worker and I shared a table together for a work project, it stayed erect for 8 hours a day I swear. Come on, you gotta excuse my nose for bleeding over that kind of all-American old-fashioned white boys if I get that Asian fetish crap in the city everyday too. I just fall into a coma when the guy is shy and asks, "maybe I can see you soon?"

Argh, no. Won't find another MidWestern guy like my love. Or indeed another guy.
Posted by .

But what would happen to your monicker?

It seems like a stand up place, but is it worth being called Grand Island Chick?

Yeah, because, you know: Grand!

And islands are nice.

Frank... The thing is, it's not an island... There're no islands there... It's all flat with some establishments here and there, cows and corn. Strange huh? Why is it called an Island? No idea...

Bob you wanna meet me in Nebraska?!

Actually, I've been there -- "back in the day" I camped across the country a couple of times. Stopped one time at North Platte...and there are a couple of islands in the Platte -- toward the east.

So, I'll have the tent pitched and a fire goin' when you get there.

Oh that's really close! Or we can have burritos in Lincoln.

I know you're not gonna believe me but I've had fantastic Mexican food in Nebraska. That should be a realistic happening despite of my consumption of canned fruits and 150% cooked Omaha steaks for days after days. It was an oasis indeed.

Then you'll just have to be Grand Chick. It's a bit of a downgrade, I know, because everyone enjoys islands, real or pretend.

Okay Frank, I can't take that demotion. I'm staying in Downtown with no mortgage then.
;-P

Look at it this way, your monicker allows you culture! And not the acidophilus kind--real culture.

Um Frank, it's hard to control it sometimes. Girls get yeast when we haven't slept for days.
;-P

But--but, I was only talking about yogurt!

Why is your jaw shaking Frank?
;-P

And the mom told you this story or the yeast girl?

It was yogurt girl. God, I hope it was yogurt. Yogurt is infinitely more interesting.

You know actually they are related. When she has yeast, it helps if she eats no sugar and lots of yogurt.

I have been eating Yoplait Light very cherry for weeks because I spent all my money on my dog...

My cat was recently put down. It's hard having compassion for animals.

Your cat was sick? How old? What for?

He was elevenish. One day he had a convulsion and he seized for a good 30 seconds and then rammed into walls, chairs, etc. This would happen half a dozen times a day and then he went blind, from either running his head into things or from whatever was causing him to convulse. My parents took him to the vet, they gave him medicine and it helped for a bit. He seized again a week later and didn't snap out of it. He stayed a twisted, shaking mess, unable to stand and was put down.

But what was the cause the vet said? That sounds terrible. It must be hard for you guys. So sorry Frank. I know how it is. At least he's lucky you guys took care of him...

Vets had no idea but they thought it may have been a tumor or a parasite.

He was a good cat and lived a good life. Purred a lot =)

I hope your doggy gets better and happier. I'm sure he will with someone as compassionate as you watching him.