Let's pretend these old buildings in Downtown are those in The Latin Quarter of Paris for the moment.

So you meet a depressed mid-aged guy here. He rents an old apartment here. You're a hot chick of an exotic quality (in the movie, a young French girl; in reality, anything intriguing you can name) and he's a regular American mid-aged guy of some European descents. You do not know his name. He doesn't want to know your name. You meet him in his apartment from time to time. He says 'you don't need names in this apartment and everything outside of here is bullshit'. You try but you fail to know anything about him. All you can do is to lay in his bed naked with him and to sigh: 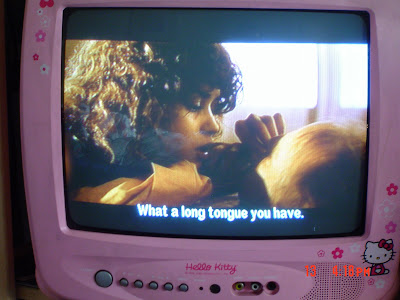 Then you reach his crotch and ask:

Goddammit I pass out. Grass-eater. It's tough to be in love. You go through his pockets, want to reach his heart so badly but he keeps shutting you off. You stand in front of the sink with him when he shaves and he consoles you, "I know it's tough, but you're gonna have to bear it. You know these things are really beautiful. They're very rare. You don't find them anymore."

These things are really beautiful. They're very rare. A beautiful woman that doesn't ask but just loves him for anything other than knowing him as a real person.

The only reason he doesn't let you know him is precisely that he thought if you finally know what a person he is, you will not love him anymore. He doubts life. He screams, "fucking God!". He expresses his disgust of society's repression, religious beliefs, "family", "church", "lie", loss of "freedom" and people's egotism when he butter-anal-rapes you.

Why does he think he's not lovable? You tell me. He is a guy, when it comes to gender; a white guy, when it comes to race; an American white guy, when it comes to nationality. Anybody still thinks relationships are only on a personal but not a sociological level? Any armchair psychologists advocating the "play hard to get" and American-style self esteem, please go do a degree in social science (in a good school) before saying anything insensitive to the related social issues of personal relationships. Give me a break if you're pleased: I'm not convinced in the 21st C dating culture, an American white guy from Little Rock in Arkansas dates a significant number of women of "Other" races after he "has made it" in Hollywood or Greenwich before he marries somebody that looks like Jennifer Gardner and Nicole Kidman is really a coincidence that he's "somehow" "in love" with her. It's xenophobia which no love from a woman can help. Let's face it: his marriage has little to do with love but reasons other than love behind marriages we see everyday on the expense of the "Other" women. (For detail, find "The Other" with 20th C French psychoanalyst Jacques Lacan.)

The only thing that can complicate such xenophobia is money ($$): that is why he married the French wife with money in the first place. He had been a boxer, a bongo player, and a journalist, in other words, an actor who bartended if in nowadays Hollywood before he married his wife.

What's funny is the English subtitle (Netflix edition) just reads "these sinks are really beautiful". If the American translator who does the subtitle has actually been around people from Paris, he'll know it is "things", not "sinks", because Marlon Brando was ridiculing the French girl's accent in the movie. French folks with a thick accent pronounce "th" as "s". I wonder how many people actually thought it's really "sinks" when Marlon Brando was indeed standing, shaving in front of the sink in the scene.

Yes, love is very rare these days, or ever (Le Dernier Tango à Paris was made in 1972 so it was the beginning of human history). True love. Not the American sociopsychologically dictated "love" I mean, argh, wimps.

"Yes, love is very rare these days, or ever (Le Dernier Tango à Paris was made in 1972 so it was the beginning of human history). True love. Not the American sociopsychologically dictated "love" I mean, argh, wimps. "

You raise a whole host of interesting issues here, LADTC, not the least of which your metaphorical reference to 1972…???

Part of the problem with "love" [and with many nouns] is the Greek mindset of categorization. [Thanks Aristotle!!!] Then we attempt to derive specific conclusions from universal premises, thus committing the fallacy of Accident.

What is "the fallacy of Accident" Professor Bob?

Ahem, let me put on my professorial wig....

Amrican men are dysfunctional in intimate relationships. [a generalization]

Mr. Luap is an American.

So, he will be dysfunctional in an intimate relationship.

The Fallacy: he might be....but by accident. The generalization doesn't support the notion that all Am men are dys. The argument is inductive, pretending to be deductive.

PS -- I've cast aside my academic robes officially as of Saturday!

So you don't believe the story is a social commentary against a quasi-universal truth of society's repression on the American white dysfunctional men?

Oh my God you retired?

"So you don't believe the story is a social commentary against a quasi-universal truth [?]of[?] society's repression on the American white dysfunctional men?"

"Oh my God you retired?"

On. Or of the dysfunctional chick apparently.

You got a longass new title dude.