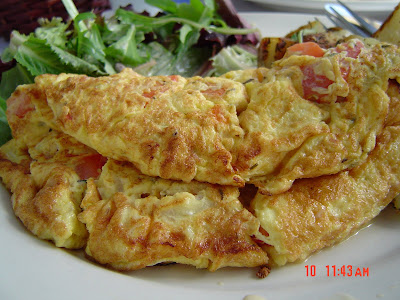 Mirage mirage! Angelique was actually opened according to its schedule! I must be seeing ghost this morning! That's not possible!

Super attentive and helpful servers. I made sure he got 20% tips even though he thought I ordered the Omelette Provence while I actually said Morocaine. (God, am I that bad? I must be possessed by a demon. Where's my Exocist?)

I left my purse there. They even ran out and took it back to me. 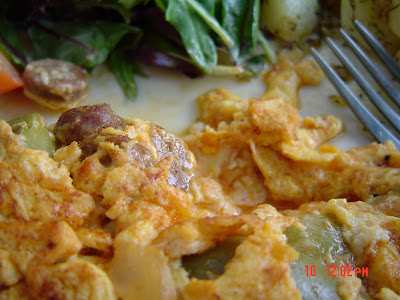 The only thing is, the replaced Omelette Morocaine had a problem. It's watery. I think the moisture came from the squash and bell peppers. Mom said vegetable omelette should be scooped out right after the vegetables were warm enough but not any cooked in the pan. Otherwise water came out and the omelette was ruined. Well, not "ruined ruined", but the cook then lost point. The spicy Merquez sausage was also just so so. The salad was good. Would be better if with walnuts and slightly sweet dressing instead of sour if with omelette. But for $9 I was totally fine with what I got. Cheap eat for that amount. I was just being a pain. Nevermind me.

Wish the portion were smaller. It's a GIANT omelette nobody could finish. Waste of food. I'd be happy to pay $12 if they made it smaller but added walnuts, used better dressing and made better omelette though.

The hash browns were delicious. Hash browns're hard to make. But the herb and frying were just right. Good job.
Posted by .