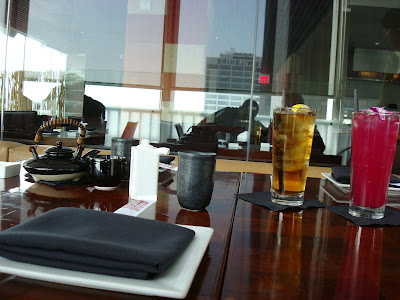 This is actually located inside Elevate Lounge. I used to work around the corner for years before I became Downtown Chick. You know what I like the most about Takami Sushi? Their outdoor seating.

It's like eating sushi on the roof top of the Standard, but you can enjoy it in the middle of the day (with no alcohol), and come back to work feeling refreshed. Believe it or not, I love the rooftop atomosphere, but I hate having to drink in order to enjoy it. My building does not have an open rooftop. So instead of doing the Downtown-style rooftop party thing at night, having an affordable bento box at Takami every once in a while is actually an awesome idea. You park right behind the building on Figueroa for $5, cross the gate, then you're in Elevate's building. Easy, when you consider Downtown's parking situation. 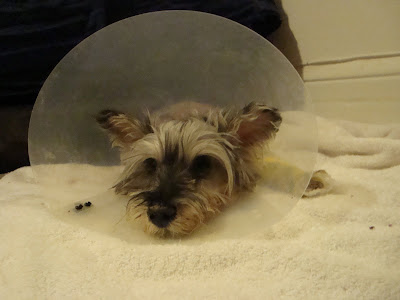 The crowd is the same Financial District-corporate-slave types. Guys in suits, normal working people. No drama. Relaxed. Just the way it's supposed to be. Twenty-one floors above where you imagined all the troubles in life were (at least in that little lunch hour) you get some fresh air. Poof. Hell, yeah.

It's been tough these days. With a few gigs, studies, my little high-maintenance "owner" getting all sick and spending my money like a maniac again, am I the only crazy chick running around like a chicken with her head cut off ? I know I'm not, and a little cold food can certainly calm me down. See the picture of my master there? Yeah, that's kind of how I feel these days too. 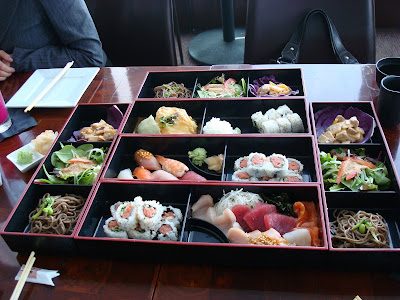 The salad that came with the Sushi and Sashimi Bento lunch specials was very spring/summer-like. A little zesty Asian mango sauce over some apple worked like magic. Very refreshing. That was my favorite part of the meal. I've had nothing like that before. Lemme tell ya. It's definitely not traditional Japanese. It's what I call "Downtown-Japanese." I also got a green salad and some soba to go with the fish.

The only cooked fish we ordered was the seabass, and my only complaint was there was too little of it: the seabass was just perfect! Cooked in a creamy sauce just right, it was so fat and rich, but still on the healthy side. An amazing carnovore-friendly dish. I actually would also say their salmon and tuna were at least Sushi-Gen quality, if not Kappo (if you care about sashimi), which was a nice surprise. Spicy tuna rolls are for the ABC, Hispanic, African American and white girlfriends, you know that, but Takami's were actually fresh and respectable, unlike the usual vulgar frozen, overtly spiced Kabuki-style spicy tuna rolls for tourists in Hollywood. Forgive me if I'm judging this place as "a white place," cuz come on, this is not Little Tokyo. We're talking about almost the polar opposite of Sanwa Plaza. I normally wouldn't even dream of having Japanese food around here, unless I was splurgin at Sai Sai's. Haven't we all known how boring Kyoto is? With that kind of a budget, I'd go to Cardini any day, but I'd never think of Japanese food.

I really hope Takami hangs in there. It's a convenient stop. And at $17-25 per entry, it's a great place for meeting a client or just having lunch with a frugal guy when I know he's paying. How else are you gonna get a decent bento box overlooking Downtown without breaking the bank or driving all the way to Little Tokyo? You can't. Times are tough. When you really think about it, Takami is actually not a bad deal.