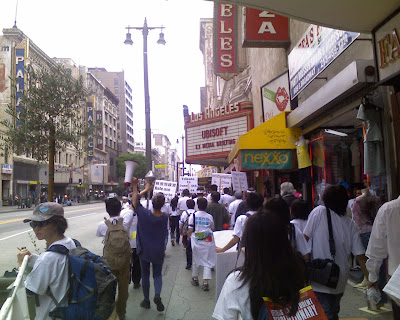 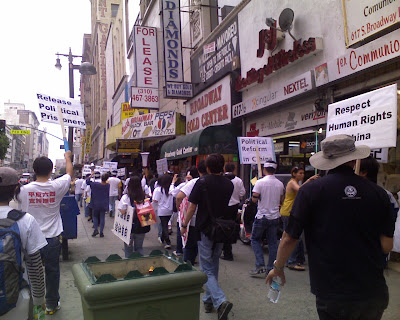 Write to your congress representatives, tell your friends and families to support press, religious freedom in China.
Posted by . No comments:

I'm in the March in Chinatown now 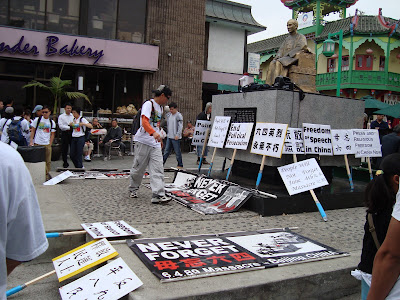 Anybody that values human rights and freedom of speech in China should never forget the June 4 Massacre. The government used tanks and guns to kill its intellectuals, university students and citizens who demanded democracy. 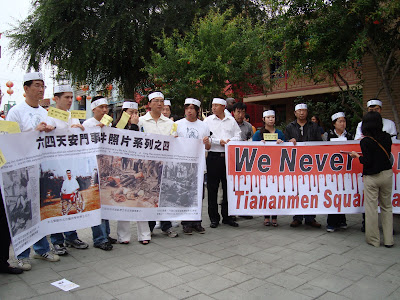 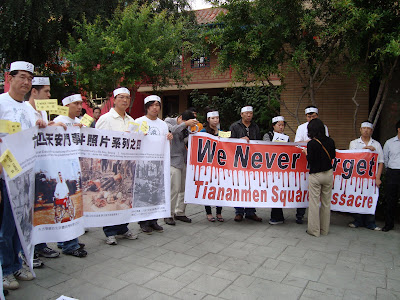 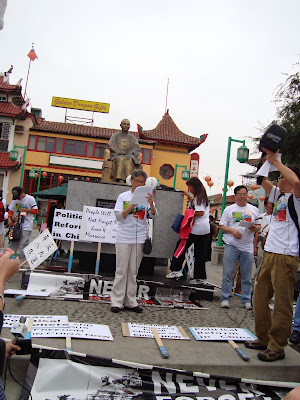 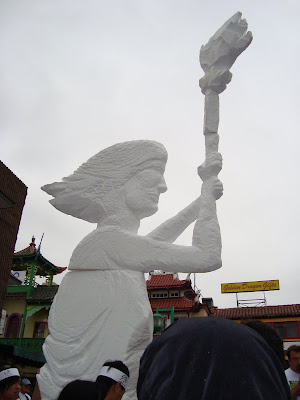 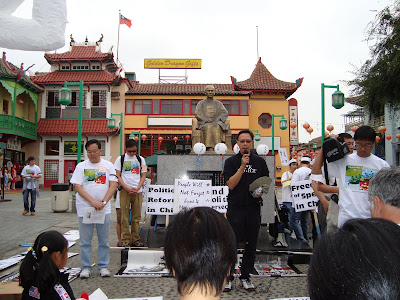 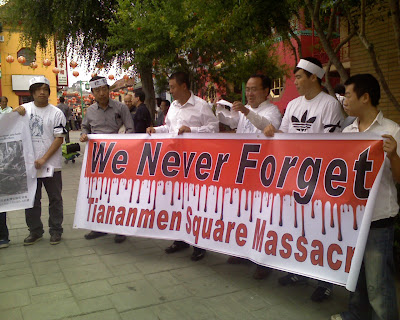 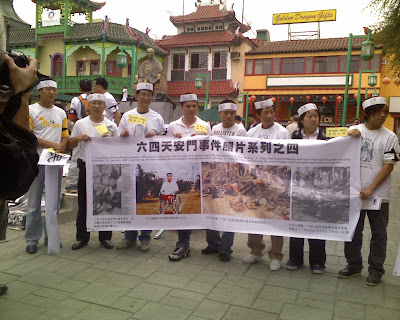 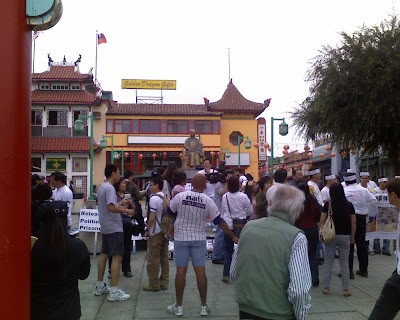 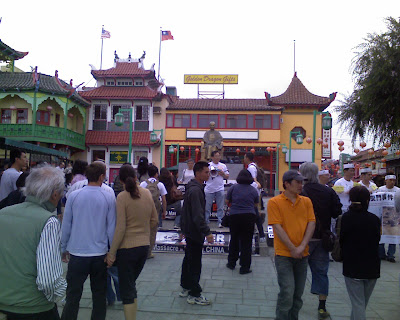 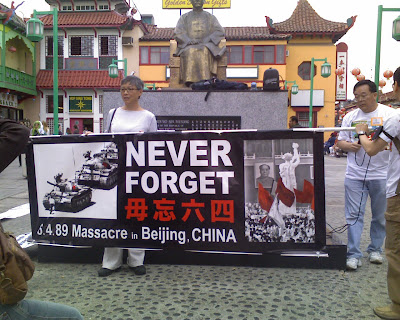 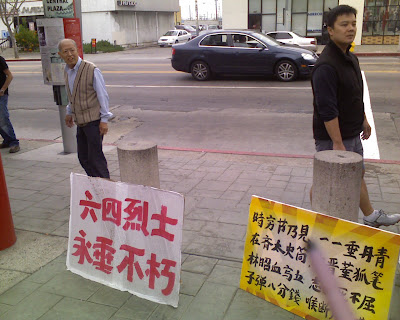 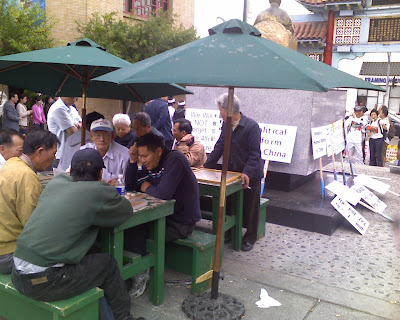 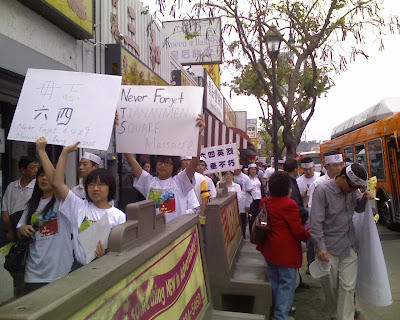 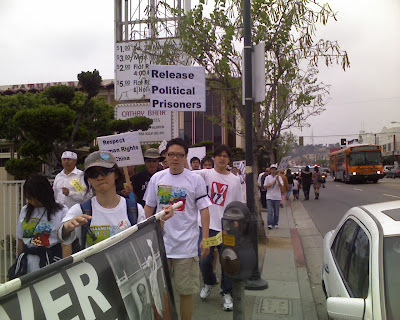 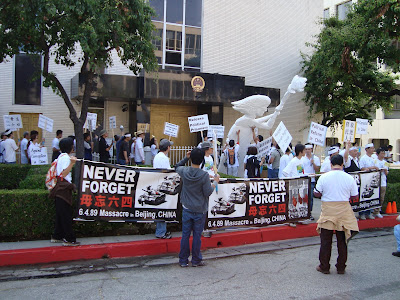 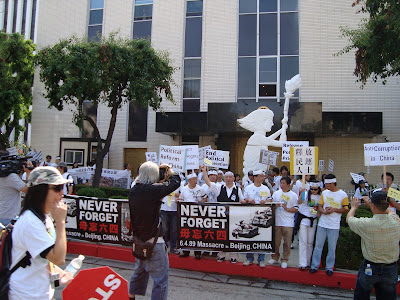 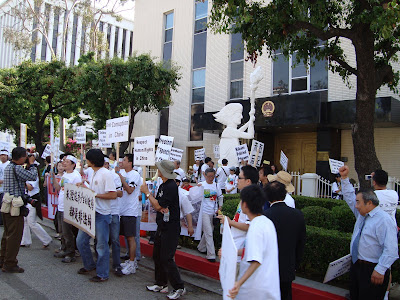 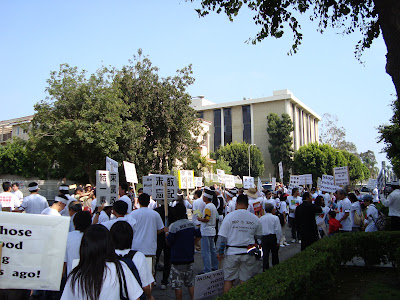 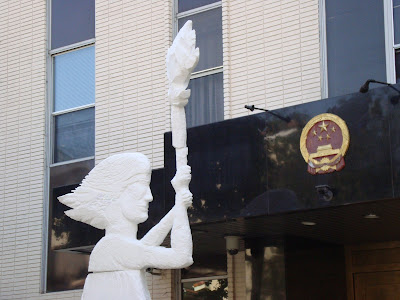 Posted by . No comments:

Once upon a time, I had only one hour to do lunch here with Joe because we had things to do that day back-to-back. So we went to this cafe next to Cole's on 6th Street. There was a kid that waited all the tables. We went in at about 12:00PM. The kid gave us a breakfast menu. We asked for the lunch menus. He gave us one lunch menu. We thought the menu looked okay and decided to get seated. I immediately ordered an iced coffee to start since I really needed caffeine. I was on my period and going through some crazy job situation. You know how a psycho woman on her period is like, right? Okay good, let's go on.

Then after 5 minutes, we were still holding just the same lunch menu we brought over ourselves. We had 2 people. I had no idea what to order. Then, the kid gave me an iced tea. I ordered coffee.

After another 5 minutes and all the hassle of asking for breakfast and lunch menus back so we knew what to order, and returned the tea for coffee, we tried to place orders. Since there was only that kid there for all the tables, we had waited for another 10 minutes before he came to take our orders. By the way, there was no creamer for the coffee. I asked again. It seems like you had to ask for every fucking thing there or they just wouldn't give it to you.

So I ordered the Blu LA huevos. I wanted some over-easy fried eggs with salsa and beans. First, the eggs were too cooked, but I said, I didn't care, I was tired and hungry. Let's just get it over with. Then, I put some patches of hard fried egg-white, yolk, some black beans, salsa and guacamole in the tortilla and started digging. Um, wait a minute, I think I tasted germs.

What was it? Germs? I thought I must have not gotten enough sleep from the previous night. So I had a sip of my iced coffee to sober up. Then I ate again. Um, I think I smelt trash. Pretty sure. So I sniffed my tortilla and realized it was the guacamole. I still was not sure if it was my hormones because Joe had been telling me I was extra crazy during my period. So I asked him to confirm for me. As a protective boyfriend, he went to try some of that stinky thing himself. Yes, holy moly, that greenish brown stuff already went bad!

What happened? You got the idea. The manager came and apologized. He said the guacamole was just "too ripe". He was a really nice Asian guy so I was easy on him. He offered to get me something else and take the huevos off our check. But their guacamole had so successfully served as an appetite suppressant that I was no longer hungry. Argh. 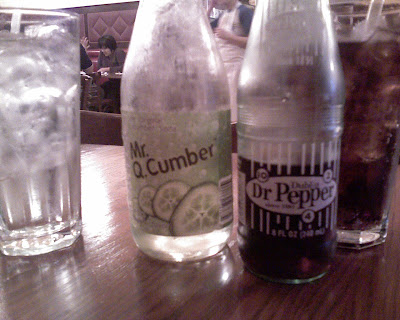 I think I heard the owner of Nickel was owned by the same grumpy lady in Banquet who was sometimes a little scary. Maybe she should close Banquet and focus on Nickel, because it is so obvious that Nickel is so much better as a food business. If Nickel is a work of passion as a diner, Banquet is probably a work of inertia as a wine bar. Jeez, finally there's somebody who can cook on this block!

Everybody has tried Nickel. I heard all the complaints about the notorious 1-hour wait and discriminatory services against single guests. But the crowd waiting outside of it at 11:45AM on sundays is obviously an impressive exception for this kind of economy. Can't beat that. I guess I got lucky. Everything during my visit was pretty good from what I remember. I loved the yummy cucumber soda in particular. It was very refreshing and not that sweet. Wanna find out where I can buy in bulk and stock up at home. 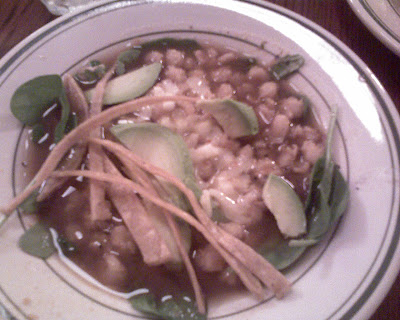 The vegan chili with avocado and soy cheese was awesome. The base was very thin, making it more like a soup than a paste. It was very favorful, not like any of the usual disgusting sweet, oily and sticky chili with cheddar at all. Order a large one at $6 if that's already your lunch / dinner. The $4 would be enough only as a starter if you order another entry. 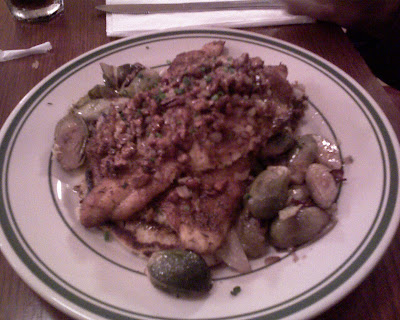 The catfish with corn cakes underneath was a piece of art. The pecan sauce was so tasty! The fillets were a little crusty on the surface with herbs and pecan sprinkled all over. I am definitely going to experiment it at home. I love cooking catfish. It has a good rich, smooth and thick texture with enough fat but does not come with an overwhelming favor. I like making Chinese congee with catfish nuggets when I am sick or marinate them and bake them for an easy toaster oven meal. But my super picky pescatarian boyfriend never touched my catfish before. Guess what? He had a bite of Nickel's pecan catfish and sighed that if I could cook that well, he would marry me. Well, what about if he could cook that well, I would marry him? Huh?! I can't believe he ate some of the bacon brussel sprouts on the side. He would claim he didn't but I was pretty sure there was some bacon on his fork. Bleh.

The dish was pretty big. I suggest to eat all the fish and get the corn cake to go if you can't finish all of it. The fish becomes harder and dryer if you microwave it afterwards. 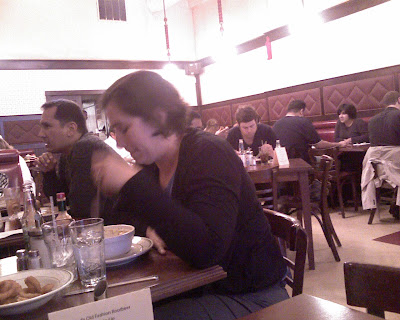 As for the crowd, honestly, I have no idea, and I really don't care. It's definitely not a place to meet people. That's for sure. The decor was okay-cool but all color-coordinated so I don't know how much of it is original of the building. I was just there for the food.