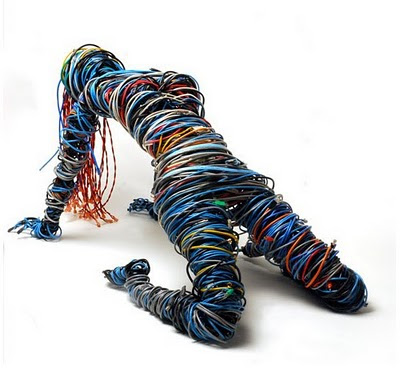 [photo copied from Gizmodo] Does anybody read Susan Sontag here? I'm deeply influenced by Sontag and therefore immediately think of her short comment on, Women, the photo book of Annie Leibovitz in terms of how women are subject to sexualization however they look. How is that possibly this blogger contributor whatever, Brian Barrett, think this is "stunning"? (Click on source of photo for original post) I mean, "stunning"?! If cables automatically mean "connected" instead of "restricted" to him, I firmly believe it is only because of this mannequin's highly sexualized posture as well as its perfectly proportioned female body (of course, according to society's standard).

But the real question is, why would cables imply sex? It's like saying why would chicken wings, clouds and bugs imply sex. It makes absolutely no sense whatsoever until you sexualize all daily objects. The relationship between the signifier and signified is completely subject to society's consumption of the female body.

What's ironic is I actually think this would have made a good piece of art if there is no mentioning of "self sculpture", i.e., self-identification. I mean, women, come on, grow up. If you really are what you think you are, you don't have to say it out loud. Others can see it.

Please make sure you quote me if you are writing a paper or some sort, as it will become plagiarism if you don't. Thank you!